Last week I was talking with a director whom I will call Celeste, and she was very worried. She had delegated a project to Pete, and he wasn’t succeeding. He had missed every deadline. He didn’t understand the technical language and he didn’t ask for help. When Celeste talked to Pete, he looked like a deer in headlights, staring back.

I suggested that I would talk to Pete. Celeste hedged, “Well, you can try it, but I don’t want him to feel like I am not supporting him.”

The lack of communication and the assumptions being made between Pete and Celeste reminded me of my ATV (All Terrain Vehicle) adventure in Costa Rica.

Several years ago, my family and I visited Costa Rica. Two of our kids suggested that we go on an ATV Tour. This sounded like a great idea given the amazing scenery. 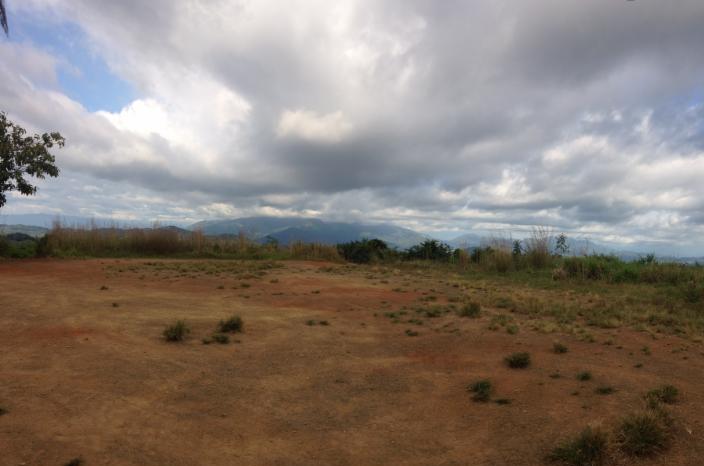 I was excited to go, and a little nervous, since for all of us this was our first ATV experience. When we arrived, we watched a ten minute training video, and then we strapped on our helmets.

We were then led to four ATVs. One for my husband, Bill. One for our son, Jeffrey. One for me and one to be shared by the tour guide, Pedro, and our daughter Katie, who was not old enough to drive at the time. I hadn’t realized I would be driving instead of riding. Pedro smiled broadly and warmly. He spoke very little English and we spoke less Spanish, but he seemed friendly and his gestures were clear.

I got on my ATV, turned the gas handle and bolted. My head jerked. My neck jerked. Then somehow I stopped the vehicle. Jeffrey came over and told me how to ease into it. Now, with 30 seconds more of direction, I knew how to accelerate smoothly. I was getting more anxious.

We rode along a dirt path for about 100 yards and then we came to a street. Pedro and Katie stopped. Bill stopped. Jeffrey stopped. I had a momentary lapse and I came way too close to Jeffrey. Okay, I hit him, but it was a little hit and now I knew more about how the brakes worked. I found the ATV very difficult to maneuver, but I guess that’s obvious. I started thinking about our health insurance and if hospitals in Costa Rica would accept it.

We crossed the street and we decided to change our riding order so I could be closer to Pedro and he could give me hand signals before we were to stop. Memory doesn’t serve me well how this was communicated, but we all shifted and moved. I was relieved to have Pedro closer, but my mind was still focused on calculating the cost of broken bones set in Costa Rican hospitals. 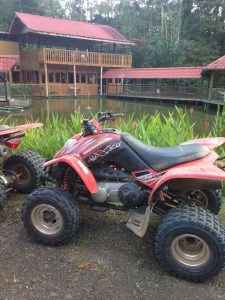 Following the dirt path, my ATV tire went into a rut. No one else’s did. Pedro came over and lifted my ATV out. He was no longer smiling. Jeffrey and Bill were chatting about the incredible vista. I hadn’t seen it. I was too terrified to look up while driving. While they were talking I was thinking about my calendar. What programs did I have in the upcoming weeks? Where were they located? Would I be able to deliver my speeches with a cast? Who else could do my programs?

What had I gotten myself into? If we turned back, no one would be able to go on the trip. Should I just stay on the side of the mountain by myself while everyone went? Could I drive back by myself? I was terrified.

I was sweating profusely. It was hot, but no one else was dripping wet. My heart was racing. I was still thinking about insurance, but I had shifted from health insurance to auto insurance. Would our car insurance pay for this vehicle? What was the deductible? How much do ATVs cost? How much do they cost with the conversion rate?

Katie waved and smiled at me. I couldn’t wave back because I couldn’t let go of the handles.

Then it happened. While I was looking up, I went right into a ditch. No else did. Just me.

Everyone stopped. Pedro walked over and he looked even more terrified than I felt. How was that possible? In his incredibly broken English he explained to me that it wasn’t safe for me to be driving the ATV.

He said, “Sorry.” And he looked very sorry.

He gestured to me that I should get on the back of his ATV.

“What about Katie?” I thought.

He motioned that Katie should be on her brother’s ATV.

Pedro drove my former ATV behind the bushes and walked away.

I wondered, “Wasn’t he worried it would be stolen?”

He explained in very broken English that he was very sorry that he “had to” take away the ATV that I had been “driving”. He was sorry.

I was elated.
I was thrilled.
I was safe.
I was able to look up and see the scenery.
I didn’t have to end the event for my family.
I wasn’t in a hospital.
My bones were all intact.
I wasn’t sorry, I was elated!

I wasn’t sorry. I was not competent enough to drive an ATV, so I was relieved to take the back seat.

My ATV adventure ended happily. Ultimately Celeste’s and Pete’s problems had the same outcome. Celeste did move Pete off the project. Pete was disappointed, but later realized that he was not yet equipped with the skills he needed for the project to be completed. Celeste and a colleague had to give up two weekends to catch up, but at least she didn’t need to worry about her auto insurance anymore.

When issues with competence and communication put you and your projects at risk, it’s time to take action. What assumptions have you made that you need to rethink? 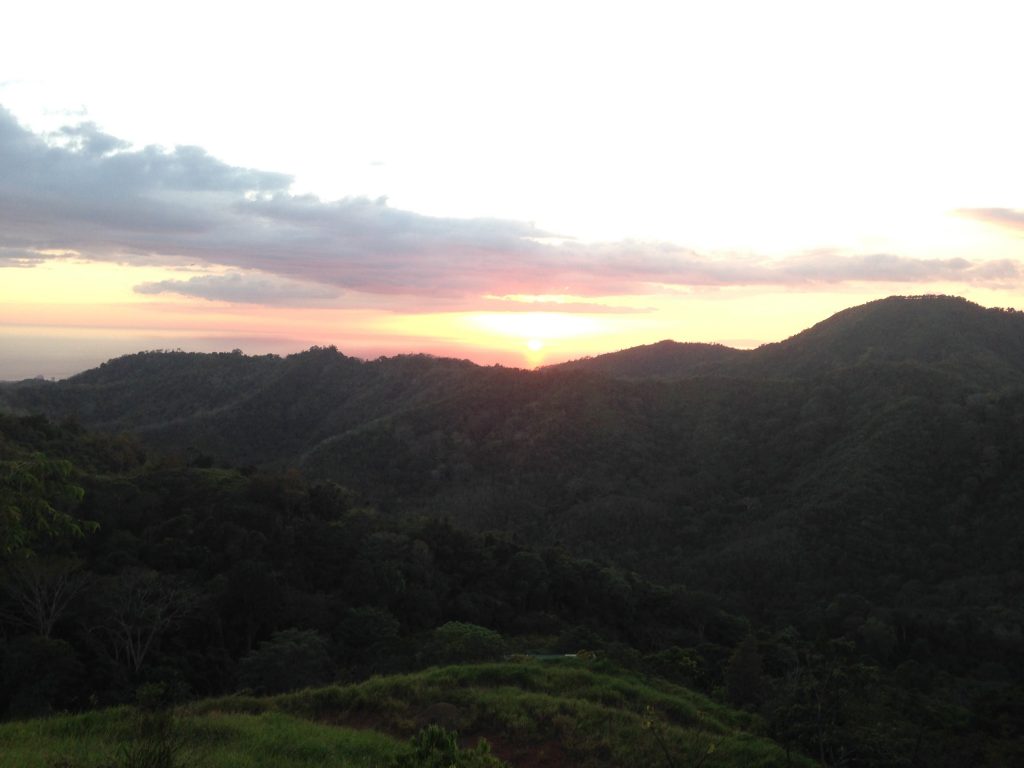 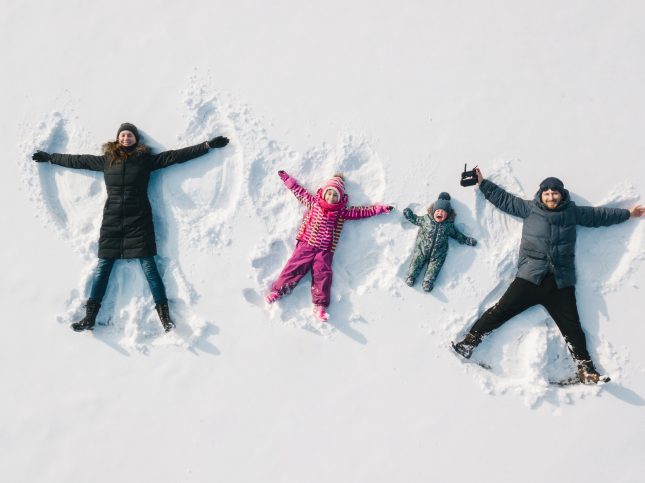 This Is Not a Snow Day! 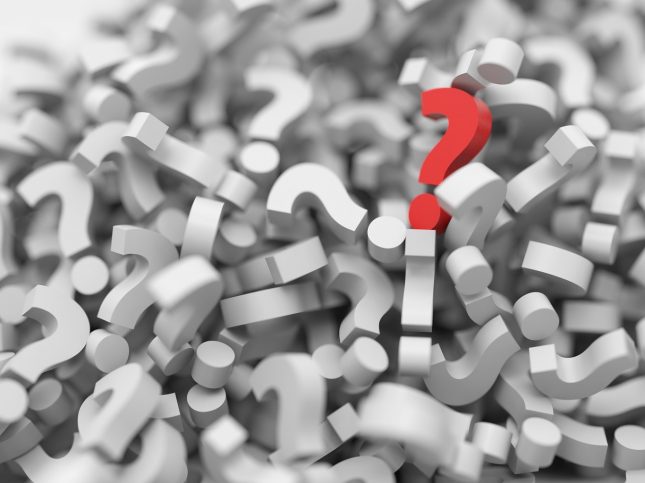